The Carnegie Medal of Philanthropy was inaugurated on December 10, 2001 by representatives of the more than twenty institutions Andrew Carnegie established all over the world. This Award, created at the centennial observance of Mr. Carnegie’s official career as a philanthropist, is given every two years to one or more individuals who, like Andrew Carnegie, have dedicated their private wealth to the public good and who have impressive careers as philanthropists. 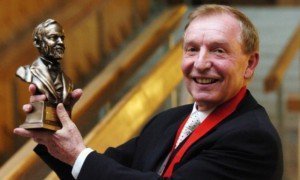 Sir Tom Farmer with his Andrew Carnegie bust, given at the Scotish Parliament, Edinburgh UK, 2013.

The philanthropic impact of the Carnegie medalists has been enormous. Literally billions of pounds have improved the lives of people around the globe. These philanthropists  and the foundations which they have established have changed the way we all live, and have changed it for the better.